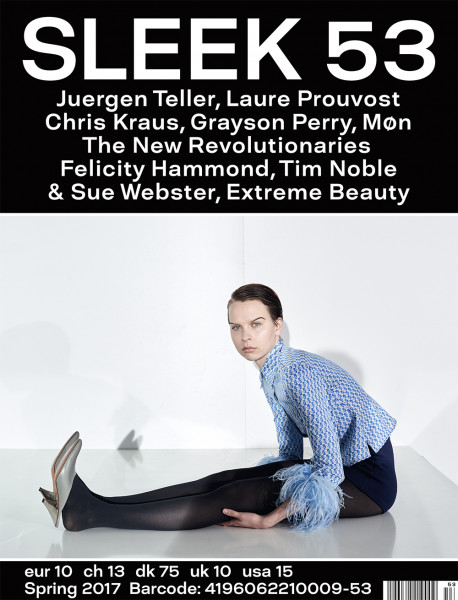 SLEEK dedicates issue 53 to The New Revolutionaries, the previously politically apathetic generation that is now waking up across the worlds of art and fashion. Dissecting the current generation are our art and fashion editors, Will Furtado and Jessica Hannan, seeing how these cultures respond during a time of deep uncertainty for the future. Additionally, we visit Juergen Teller at his home in Bavaria, where he talks about working with Charlotte Rampling and art in the age of Instagram. Elsewhere in the magazine, Grayson Perry talks about why men need to be feminists, and we have a conversation with Chris Kraus about failure and inventing Karl Ove Knausgaard. For our cover story, photographer Mark Rabadan and stylist Toby Grimditch join forces in a womenswear editorial entitled “Working 9-5”.

For this issue’s “Ones To Watch,” we speak with fashion designer Peet Dullaert, Ghanian powerhouse Elisabeth Sutherland, and ceramicist John Booth.
“Møn, Møn, Møn” sees Till Janz shooting a men’s editorial on the Danish Island of Møn.
We invite six artists, including Raul Walch and Skollie, to talk about how they are using art in order to fight autocracy and populism.
Kate Mur is given the artistic freedom to create her most extreme looks to date.
A 16-page exclusive visual essay from Felicity Hammond.
We give the last word to YBA icons Tim Noble and Sue Webster, who discuss everything from gentrification to upcycling old works.