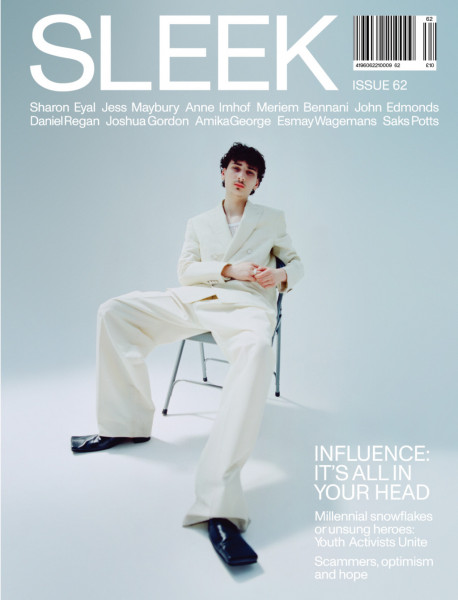 Influence: it’s all in your head.

For our Summer issue – covered by photographer Daniel Regan featuring model Jim Longden – we’re looking into influence and everything it means aside from social media. After all, the arts, culture and fashion are meant to reflect and create new questions about the times we live in.

What interests us at SLEEK is what the concept of influence means. How, for instance, we assume that it’s such a new phenomenon, so of the zeitgeist, and impossible to imagine in any other climate other than our own social media saturated one, when, actually, influence has been a huge part of how pop culture and current affairs have developed over the last millennium.

In our research section, Ruby Brunton reflects on the origin of the word influence in “Influence: An Etymology” and finds that it far precedes Instagram and the Kardashians. Meanwhile, Nimrod Kamer looks at the rise of fake influence, from CGI scammers to the most famous millennial scammer of all, Anna Delvey. Journalist Sophie Wilkinson meets the new generation of young British activists, including #FreePeriods campaigner Amika George and non-binary rights petitioner, Jamie Windust. Larissa Pham speaks to three artists from this year’s Whitney Biennial — John Edmonds, Meriem Bennani and Paul Mpagi Sepuya — and co-curator Jane Panetta on whether art still has the ability to leverage and transform popular opinion.

Elsewhere, choreographer Sharon Eyal —responsible for the dancers at the Dior Spring/Summer 2019 show — speaks about her absurdly eccentric choreography and is photographed alongside her troupe in Marine Serre by Solange-collaborator, Carlota Guerrero.

In her regular column, Chris Kraus looks at the possibility if being a ‘total artist’ and David Wojnarowicz. Charles Bramesco reflects on Derek Jarman’s English Heritage plaque — 25 years after the artist and filmmaker’s death. And fashion writer and Instagram satirist Raven Smith chooses his favourite books to get you through these challenging times

For this issue’s cabinet, model of the moment Jess Maybury collaborates with her boyfriend, the photographer Joshua Gordon, in the identity-swap photo story, "Jess and Joshua". Daniel Regan shoots a Spring/Summer unisex editorial, and Kito Muñoz lenses menswear just outside of Madrid. Packed with both emotion and gumption, it’s a mood we can all get behind this summer.